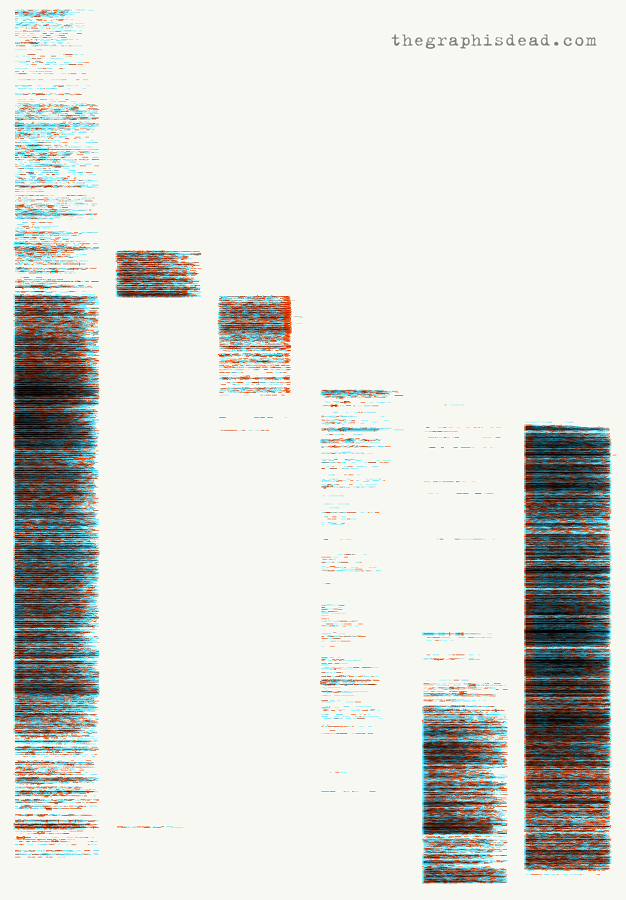 In short: All Donald Trump’s Twitter activity since May 2009, and how it looks. Blue=negative, Red=positive.

Description: All Donald Trump’s (DT) Tweets separated by device (Left to right: Web; Tweetdeck; Twitlonger; Facebook & Instagram; iPhone; Android) in date order from May 2009 (top) to April 2017 (bottom). The color is a form of visual sentiment analysis where red is how “positive” the word looks, and blue “negative”.  Each word has a score, for example the word “cherry” is visually similar to the positive word “cheer” and also the negative word “cheat” though the sentiment of “cherry” is entirely separate from either.  As well as showing up the use of recognized negative/positive words, the style of writing and the naturally available vocabulary can also be seen. Changes in author/style could be seen by doing this. It is a form of sentiment analysis, but heavily skewed to how the text appears visually.

As shown by Brian Griffey (http://varianceexplained.org/r/trump-tweets/) and others, the device choice for DT shows a distinct difference in Twitter use and content, particularly during the election campaign. This image of the extended dataset shows, for example, more recently how the tweets from the Android device are more verbose and positive than the iPhone device (it is suspected that the iPhone was used by his campaign team and the Android by DT himself). As soon as the iPhone was used in earnest, the Android Tweets became more “positive” in appearance. Since 2009, the positive and negative appearance of all Tweets have ebbed and flowed.

The image relies on how, at a glance, it makes the Tweet-reader feel. Picking out words with, (or appearing to have) stark meanings impacts the reader. This image does not focus on the meaning behind the language, but rather the tries to reveal an evolution of an inner dialogue, such that it is, of the now president of the USA.

Point of interest:   For the Twitlonger client the final word of each tweet appears to have the same positive appearance. For these tweets the Tweet ends “(cont)” followed by a URL. “cont” has a very positive appearance (despite its phonetic similarity with a swear word) due to the Latin roots (meaning “with”).

Technical: All Donald Trump’s tweets from May 2009 to April 2017 (taken from https://data.world/datacrunch/every-donald-trump-tweet) displayed in date order (top to bottom) for each device used (Left to right: Web; Tweetdeck; Twitlonger; Facebook & Instagram; iPhone; Android). The color is a form of sentiment analysis, in that the word being compared has a score of visual similarity with known positive or negative words (taken from http://www.cs.uic.edu/~liub/FBS/sentiment-analysis.html and references therein). Blue = negative; Red = positive. Each word is added as a single line but also a fainter wider rectangle to bring out any general group trends. Links are removed from the tweets. Blue/red is chosen as negative/positive in reference to usual scientific color-coding, for example analogous to electrical wiring. The alternative of red/black would have hidden too much of the detail.