I started this project a while ago for my own interest and I thought it might be a good idea to put it online to see where it goes. Here’s the thing…

Science has a problem. The graph is dead. Is Art the solution?

Science is necessarily methodical, and methodical can be slow. Like any slow process, the evolution and modernizing of the process is … even slower. And the world is evolving particularly fast where data is concerned. Data processing and storage is increasing exponentially, and the science is falling behind.

In 1786 a Scotsman called William Playfair created the first graph. He was a hero and changed all our lives. Graphs settled many an argument by displaying a truth and we all benefited. Today the truths we need are more complex and the arguments not so easily settled by a simple graph. Pick your own favorite controversial topic and there will be “some science” in there, on both sides, and often saying opposite things. A graph on its own doesn’t settle anything anymore and presenting the science can often just alienate the people who believe in the opposite view. The data is often messy. The issues are often equally messy and we get fed up with experts interpreting data with a prejudice. We do, however, trust our own instincts, our own interpretations and our own eyes. Science, I think, needs to embrace that when approaching modern data and display it without prejudice, while keeping the core values of the scientific method. I am all for the scientific method but it’s not 1786, and a graph can hide too much. We need new methods of displaying the nature of the world around us.

So, where does Art come into this?

Often a piece of art will have two effects: the first is an immediate impact, a reaction to what is in front of you and often involves a degree of emotion; the second is a reflective and more carefully sought-out impact, a re-evaluation of the initial impact and perhaps an attempt to understand the motivations of the artist. Data traditionally is displayed to alone have an immediate impact and to give a binary conclusion as to whether a hypothesis is “proven” or “dis-proven”. This is a valuable approach, but with the data being accumulated now, the longer-term more in-depth understanding of the nature of what is being displayed should also be included to give the viewer a deeper, and perhaps truer, understanding of what is being portrayed.

Pointillism existed long before the pixel.  The impressionist used brush strokes that were deliberately different from each other to convey a truer sense of what they saw before them. This was long before Big Data projects sought out larger scale conclusions in its approach to seemingly unrelated data. Art has always been ahead of science. Mainly due its unconstrained nature. But where Art has gone Science has eventually followed, as it is temporarily held back by the very necessary rigors of the scientific process. It is also argued that displaying scientific data well can be Art too … if you consider that Art is the communication of an idea or concept in nature. It is not new that Art and Science have a symbiotic relationship. This project aims to explore and promote this relationship.

Let’s take an example to illustrate this. A scatter plot. Something has two measurable parameters and you plot one on an x-axis and one on a y-axis. You then put the said graph in your publication or presentation, perhaps add a trend line. That is often as far as any scientist will be expected to go to display their data. However, it tells us nothing, it’s just a tick-box to say “I’ve displayed my data, here it is”. Would an artist approach displaying something in this way? “Here’s some paint on a canvas, pub anyone?” Of course not. So, let us look at a common scatter plot and see what we can do. Blood pressure. The heart pumps blood around the body and as it does so the pressure of the blood varies: the heart pumps the blood (systolic); and then refills itself with blood ready for the next pump (diastolic). The two are intrinsically related and the two values give us information on how the heart is working. Here is some data plotted in a very familiar way, by a very familiar piece of software. 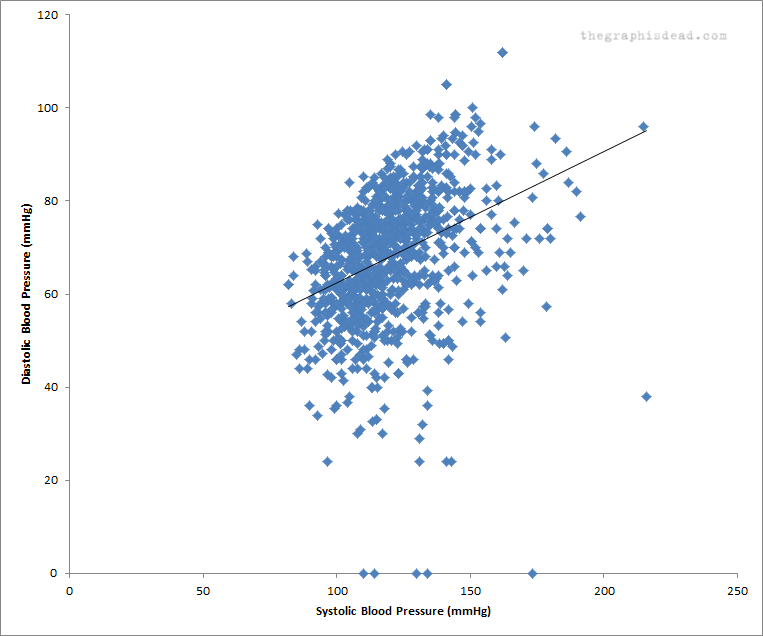 What are we looking at now? A collection of points and a meaningless line (and once you start seeing meaningless lines on graphs, you cannot stop, and for that I apologize!). So, what makes a point (a person, in this case) normal or abnormal and, medically speaking, is there anything we can do about it? This scatter plot can tell you if you’re very abnormal against everyone else, male or female, fat or thin, old or young. I’m guessing you’d already know this without this graph. Let’s re-present this another way. So, against all the instincts a scientist has been trained to have, take off the axis and labels, they’re useless. Make each point say something to let the viewer make the conclusions – for example each individual is a rectangle, the height is the Body-Mass-Index (BMI) and the width is the age. Then maybe put on a blob to signify the density of people in that region. And … get rid of that stupid line. 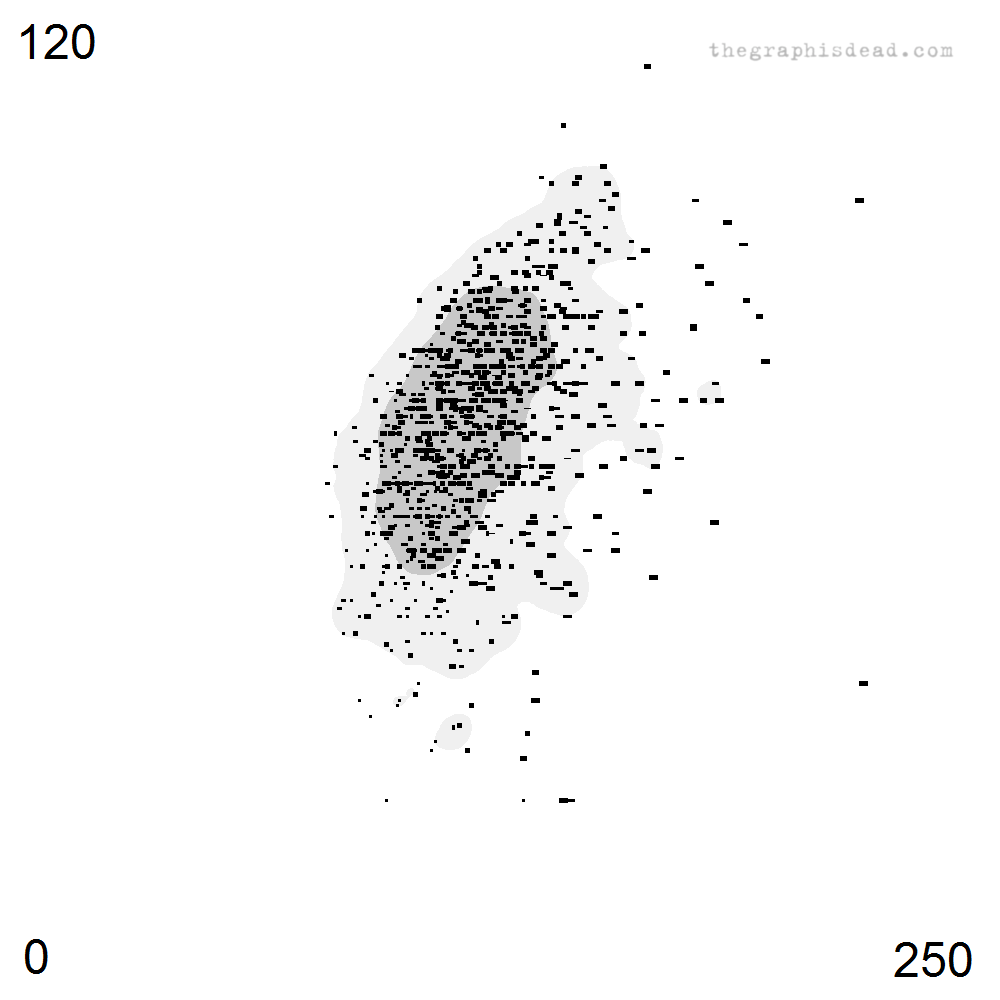 There is nothing too controversial about this, but already it gives us so much more to go on. We’ve kept the limits on the numbers to give a sense of scale. We can see that people with large systolic blood pressure (x-axis) are older people; that low blood-pressure people are young and thin; and that if you are not old and relatively healthy you could expect to be in the darker region. But the more you look at it, the more you start seeing – just like the secondary impact a piece of Art may have.

So, let’s push it further and see where it goes. Maybe now we Scientists are not comfortable but perhaps we Artists look at this step and ask “why not go further?”. 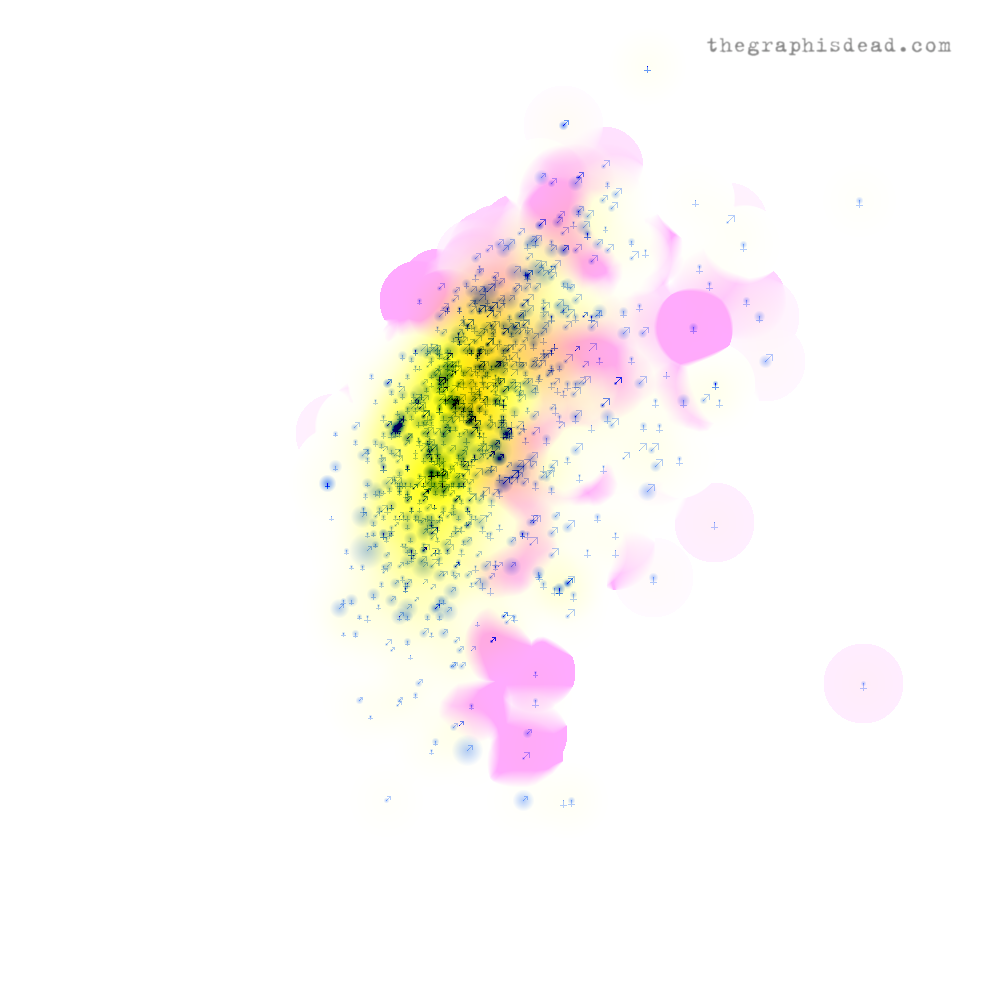 This data now includes the sex of each person with standard notation on each point, the size of which is determined by age. The blue shading on each point signifies the Folic Acid intake. The yellow again signifies the density of people in that region. And the large, overlapping points in pink occur when someone is above-average BMI. By using some color, some variation in scales and detail in each point, suddenly a lot more is apparent. Not only are some underlying truths about this data starting to emerge, but also on a human-level, a connection with the people in this particular study starts to form. Each point now starts to tell its own story.

When given some data, there are a number of questions that first need to be answered. What do we want to show? To what end? And when all the dust has settled, what impression do we want to have left?

So a bit about me.

This project is not about me. But, what qualifies me to do this? I have more than a handful of years of data, applied and pure science under my belt, and a diploma in Art. A professional scientist and an unpaid artist would be the best description. I am an enthusiast and I want to change how things are done, even by just a little bit. And hopefully gather some like-minded people along the way…